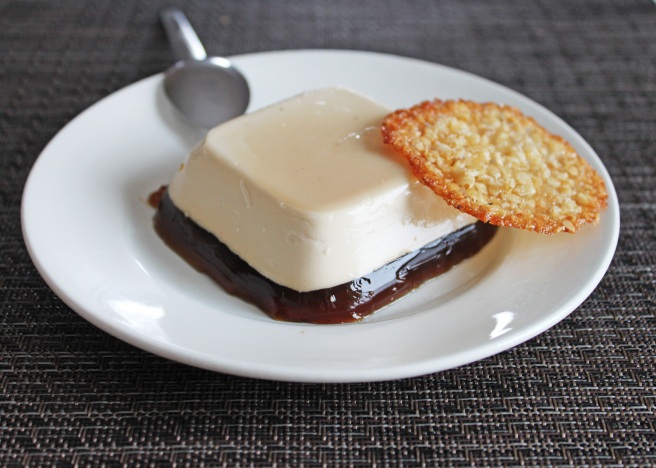 The February 2011 Daring Bakers’ challenge was hosted by Mallory from A Sofa in the Kitchen. She chose to challenge everyone to make Panna Cotta from a Giada De Laurentiis recipe and Nestle Florentine Cookies.

This is the first challenge I actually made almost as soon as I read it. Right before putting my place up for sale some friends of mine came over to help me clean out the spare bedroom. They stayed for dinner and I decided to serve them the panna cotta and cookies for dessert. I chose to make Kahlua Panna Cotta with a coffee gelee layer, because I like coffee with my cookies. The panna cotta came together very well, but I had some difficulty with the cookies. With my first batch, I made each cookie too big so it turned into one giant cookie. With the second batch I put fewer cookies on the sheet, but they were still too big. The third batch was the charm. I put about a teaspoon of dough per cookie. I’m not really sure if the cookies were supposed to spread as much as they did, I may have put too much butter in the batter. They tasted really good, but I found them a little greasy.

The 2010 November Daring Bakers’ challenge was hosted by Simona of briciole. She chose to challenge Daring Bakers to make pasta frolla for a crostata. She used her own experience as a source, as well as information from Pellegrino Artusi’s Science in the Kitchen and the Art of Eating Well.

This was my first Daring Bakers Challenge that didn’t scare the bejezus out of me. It was nice to just take a couple hours to put together this classic tart. I thought about what to fill the tart with for a while, then finally asked my family what they wanted. My brother requested something creamy/custardy, my mom requested lemon. And so my lemon scented custard crostata was born.

I wanted to try a lattice top to the tart, but I wasn’t able to slice the into even strips so I chose to cut out circles of dough instead. Once the crostata had baked I topped it with some of the candied lemon slices I made.  The crostata was delicious, but I think baking it in a tart pan was a mistake. To me a crostata should be more rustic looking, like it just got thrown together by an italian nonna on a Sunday afternoon. I thought about making another one, but my ever expanding waistline talked me out of it. There is a lot of baking to be done leading up to Christmas, and I need to choose my calories wisely. 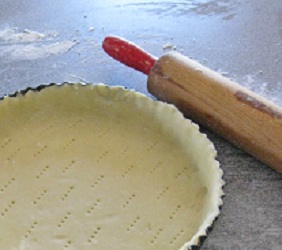 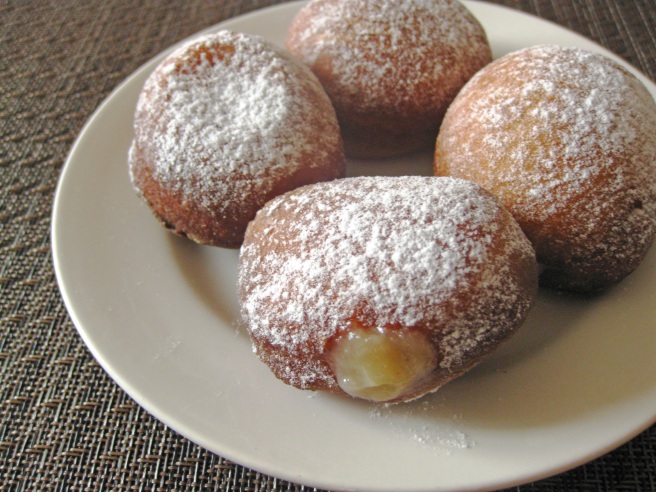 The October 2010 Daring Bakers challenge was hosted by Lori of Butter Me Up. Lori chose to challenge DBers to make doughnuts. She used several sources for her recipes including Alton Brown, Nancy Silverton, Kate Neumann and Epicurious.

I was really excited by this challenge. I’ve been meaning to make Polish doughnuts, or Paczki (pronounced ponchkee), for a while and since the challenge allowed us to use any recipe we wanted I decided now is the time. If you’ve never had Paczki, they are yeast doughnuts filled with jam (often plum) and topped with a sugar glaze and sometimes candied orange peel. They are light and fluffy and oh so delicious.

You know what makes them so good? Booze. That’s right, booze.

I got to work on the doughnuts sure that everything would come together perfectly. I believed that my half Polish self must have an innate knowledge of how to make beautifully golden and fluffy doughnuts. I was mistaken.

All of the recipes I saw called for a range of flour rather than a specific amount. It is to be added until the dough “blisters”. I thought my dough was blistering, but in hindsight I think it was still too wet. The dough is then to rise until doubled in bulk, be punched down and risen again. After an hour my dough had barely moved. I took it out of the bowl, kneaded some more flour in and tried again. On the second rise it increased a little more, but nowhere near double. No matter, I cut out the doughnuts out anyway. I brought the oil up to 350 degrees and dropped 4 or five doughnuts in, let them brown on one side then flipped them over. Except the wouldn’t stay flipped! I frantically tried to re-flip each of the doughnuts but there were too many in the pot to manage. So my first few doughnuts ended up burnt on one side and undercooked on the other. I learned my lesson and put fewer doughnuts in the oil for the second round, but in the mean time my oil had increased in temperature and these burnt immediately, although the inside was still raw. I lowered the oil temp and got a couple of decent doughnuts made. The oil temperature dropped too much though, and the last few doughnuts I made looked beautifully golden on the outside but where once again raw inside.

The few doughnuts I made that turned out were delicious. I filled some with plum jam and others with apple sauce. My filling technique needs some work because all of them were filled on one side only, as you can see below.

The conclusion I came to after all this: I need to make Paczki more often to get the technique down, otherwise I’ll have to stop claiming to be Polish.

The September 2010 Daring Bakers’ challenge was hosted by Mandy of “What the Fruitcake?!” Mandy challenged everyone to make Decorated Sugar Cookies based on recipes from Peggy Porschen and The Joy of Baking.

The challenge this month was to decorate cookies with a September theme. September honestly doesn’t have any special significance to me. When I was in school it did, but I finished university 7 years ago and seem to have gotten past the urge to buy notebooks and agenda’s at this time of year (although the agendas do tempt me).  So what’s happening? I’m eating fall foods, watching the leaves change colour, and waiting impatiently for the hockey season to start. (Go Habs Go!)

I have zero decorating skills, so this challenge scared the bejezus out of me.  The smart thing to do would have been to start right away and decorate as many cookies as a possibly could until I got the hang of it. That is not what I did. I waited till two days before the challenge deadline to start working. I baked the cookies Saturday, “decorated” (ie dropped splotches of colours on said cookies) on Sunday afternoon, and started writing this post Sunday night.My attempt to make the Montreal Canadiens logo was very quickly abandoned and I moved on to simple apples and leaves.

It turns out royal icing is tricky. To use it properly you need to know what the consistency is supposed to be for the edges and for flooding the center of the cookies. I think what I used for the edges was probably a flooding consistency, but without more practice I really couldn’t tell you. When I forget about the food colouring stains on my fingers I might try again.

I used the recipe as given in the challenge, but found it much too dry to roll out so I added a couple of tablespoons of milk to it.

If your cookies are funny looking, don’t worry about it. Decorating and taste are not correlated.

The August 2010 Daring Bakers’ challenge was hosted by Elissa of 17 and Baking. For the first time, The Daring Bakers partnered with Sugar High Fridays for a co-event and Elissa was the gracious hostess of both. Using the theme of beurre noisette, or browned butter, Elissa chose to challenge Daring Bakers to make a pound cake to be used in either a Baked Alaska or in Ice Cream Petit Fours. The sources for Elissa’s challenge were Gourmet magazine and David Lebovitz’s The Perfect Scoop.

This was my first Daring Bakers Challenge. I signed up at the beginning of July and then anxiously awaited the challenge. When I found out what it was I felt a mixture of both excitement and dread. Excitement because I had never made ice cream before and dread because I don’t own an ice cream maker. I’ve heard horror stories of crunchy ice cream that was impossible to scoop. I considered buying an ice cream maker but storage is an issue in my apartment, so I decided to try the machine free way (this is a challenge after all).

Next up was deciding if I wanted to do both the baked Alaska and the petit fours, or just one. Would I have time to make both? Could I eat both and not gain a million pounds? Once again I decided to go for it; I’m a Daring Baker!

The final decision was what kind of ice cream to make. At first I wanted to do vanilla with cinnamon chips or maybe something fruity. Then I read a post about mango tea ice cream and decided I needed to make tea flavoured ice cream, Earl Grey to be exact. (To the author of that post: I’m so sorry, I really can’t remember who you are but thanks for the inspiration!) When I got to work on the ice cream I realized that doing it without an ice cream maker actually made it pretty easy to make two small batches of different flavours so I made a batch of raspberry along with the Earl Grey. I thought the raspberry would go nicely with the chocolate ganache covering the petit fours, and it turns out it was. Plus the pink stripe looked pretty cute too.

Step one in the process was to make the ice cream. I made the Earl Grey by steeping some tea bags in the milk and sugar mixture. I also added a little Grand Marnier which went really nicely with the citrusy flavour of the tea. For the raspberry I just added some raspberry puree to the vanilla recipe. Making ice cream without an ice cream maker is surprisingly easy, all you have to do is blend the custard every thirty minutes while its freezing. Both flavours turned out very well; easy to scoop and no crunchy bits! It is time-consuming though, so if you don’t have several hours to kill I wouldn’t recommend it.

Once the ice cream was done I moved on the to beurre noisette pound cake. The smell of butter simmering is possibly one of the best smells there is. I really need more brown butter in my life. The pound cake was light and fluffy, not at all what I was expecting, and the butter gave it an amazing flavour. I think the cake was my favourite part of the challenge.

You can find all the recipes for this months challenge at Elissa’s site.

All in all I think this was a very succesful first challenge. I can’t wait for the next!