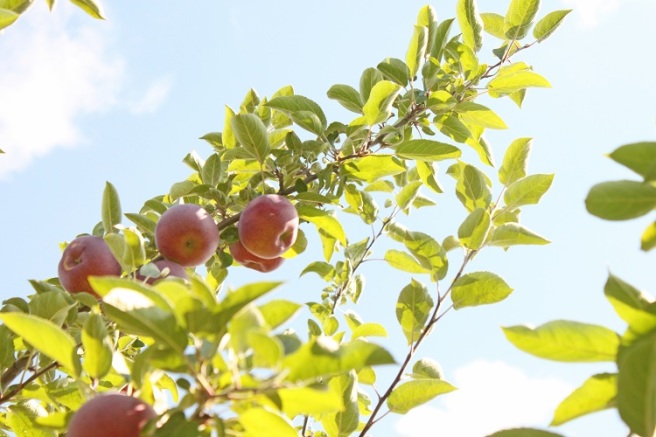 Last weekend I made my annual journey to St-Joseph-du-Lac, one of the apple picking hot spots in Quebec. The weather was incredible, close to 30 C with the humidity and sunny. Not at all the typical apple picking weather I was expecting. Normally the air up north is cool and crisp at this time of year, instead it was hot and sticky.

There were tons of people out there. We even got stuck in apple picking traffic, who knew there was even such a thing? The traffic was frustrating, but we eventually made it out into the orchard.  We repeated last years taste test, and once again decided the Cortland was the way to go. Cortlands were originally bred from McIntosh, but they are firmer and sweeter. They’ll hold their shape in a pie, but you can also make a sauce out of them. 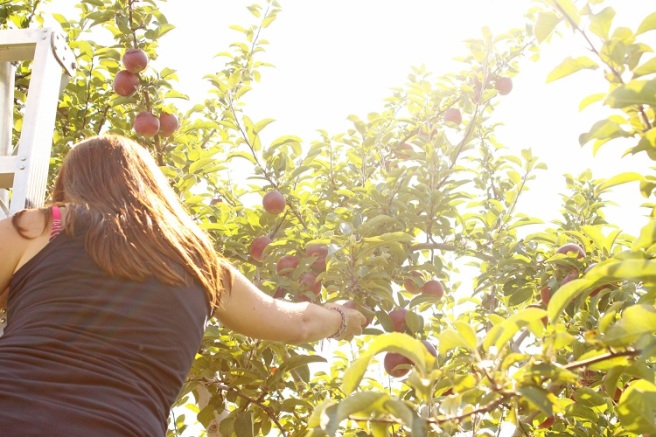 We got our hands on a good ladder and claimed a Cortland tree, then picked 20 lbs for each of us. Hopefully that’ll be enough for all the things I have planned!

When of my favourite things about apple picking is the cider doughnuts. Unfortunately, this years doughnuts were sub par, too greasy, not enough cinnamon sugar. I left the orchard craving  something more, something better. The solution was to make them myself,  but my deep frying experience has yielded mixed results and I didn’t want another disappointment. Instead I decided to make doughnut muffins with an apple cinnamon filling. The nutmeg in the batter and the cinnamon sugar coating completely satisfied my craving. They really do have the texture of a cake doughnut. The fact that they’re dipped in butter probably helps too.

Though these tasted amazing, I have to say that some of them fell apart when I took then out of muffin tin. I think it was my fault for letting the apple filling spread too much in the muffin, it basically created a complete separation between the layers of batter so the muffin top just came off. If you’re going to fill the muffins like I did make sure to make a little well in the batter for the filling.

Another thing you should know is that they are huge muffins. I adapted this from a Fine Cooking recipe, many of the commenters said they made these in mini muffin tins which I think is a great idea if you’re not using a filling.